Santas and Grinches: The heroes and villains of 2022 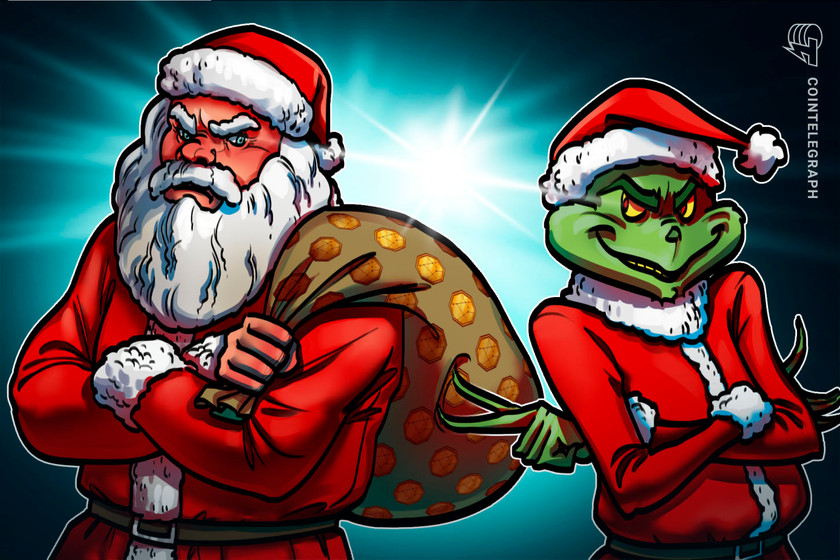 Here’s a list of the 12 individuals who had the most impact — for better or worse — on the crypto industry this past year.

From an outside perspective, 2022 has been a rollercoaster ride for crypto. The market reached a total valuation of $3 trillion during the bull market of 2021, only to scale back to its current level of around $810 billion. While this poor performance can be partly attributed to the pervading macroeconomic environment — compounded by rising inflation rates and the ongoing Ukraine-Russia conflict, among other factors — one cannot deny the role that the recent slew of insolvencies has had on the sector.

That said, below is a list of arguably the most notable heroes and villains who have undeniably impacted this rapidly evolving industry over the past year.

At a time when some of the biggest players in crypto crumbled, Changpeng Zhao, also known as “CZ,” ensured that his Binance crypto exchange held its own, even playing a role in the collapse of its closest rival, FTX.

CZ has refused to tie down the crypto exchange to the regulatory framework of one country or several. As a result, governments across the globe aren’t too big on Binance’s approach and repeatedly pressure the exchange with regulatory requests. However, despite the continued stress, Binance has grown in influence and stature. Amid a harsh crypto winter when staff layoffs were commonplace, CZ claims to have not made any major layoffs, with the exchange even looking to hire more people in the near term.

Full disclosure: Binance never shorted FTT. We still have a bag of as we stopped selling FTT after SBF called me. Very expensive call. https://t.co/3A6wyFPGlm

Lastly, CZ’s digital presence has grown over the past year, with a worldwide Twitter following of more than 8 million. Moreover, the Canadian entrepreneur recently announced that he has invested a whopping $500 million in Twitter.

It’s been an up-and-down year for Coinbase CEO Brian Armstrong, with the firm laying off several employees while experiencing a significant drop in its stock price. However, despite the setbacks, he has continued to keep his chin up. All through the year, Armstrong has been a vocal critic of the United States Securities and Exchange Commission and its chairman, Gary Gensler, claiming the SEC has stifled innovation by forcing crypto entities to adhere to extreme reporting requirements. He was also critical of the sanctions of Tornado Cash’s smart contract addresses by the United States Department of Treasury, pledging to fund a lawsuit to annul the government’s actions.

Armstrong’s commitment to decentralization and transparency was once again on full display earlier this year when he announced that Coinbase would rather halt its Ether (ETH) staking services than censor sanctioned Ethereum transactions.

While some lawmakers remain oblivious toward the crypto market, Senators Cynthia Lummis and Kirsten Gillibrand have taken the time to understand the true financial and social potential of this rapidly maturing technology.

Earlier this year, the pro-crypto duo tabled a bill called the Lummis-Gillibrand Responsible Financial Innovation Act, proposing a comprehensive framework for the governance of digital currencies. The bill was put forth in response to the SEC’s lack of clarity in the space and segregates cryptocurrencies into three categories: commodities, securities and ancillary assets.

The bill notes that cryptocurrencies categorized as commodities should be regulated by the Commodity Futures Trading Commission, with the SEC responsible for securities and ancillary assets.

Representative Tom Emmer is another voice who relayed strong support for the crypto industry this past year. Recently, the politician pointed to SEC Chair Gary Gensler’s crypto oversight strategy, calling it “indiscriminate and inconsistent.” Moreover, he revealed that since January, he has been approached by the heads of several prominent crypto entities who have complained to him that Gensler’s reporting requirements are onerous and unfair, calling them unnecessary and biased against the crypto market.

In a recent tweet, Emmer called for Gensler to testify before Congress and explain his criticized regulatory approach. He also added that “He [Gensler] declined to provide Congress with the information requested in the letter, which would’ve informed Congress of the apparent inconsistencies in Gensler’s approach that caused him to miss Terra/Luna, Celsius, Voyager, and FTX.”

After years of delays, Ethereum’s highly anticipated transition to a proof-of-stake consensus layer finally came to fruition earlier this year. Known as the Merge, it was the first time a project of Ethereum’s size successfully completed a technical maneuver of this scale.

More than 100 developers worked on making the network’s transition from the energy-intensive proof-of-work consensus layer to proof-of-stake a seamless reality.

It’s no surprise to see this name on the list. Sam Bankman-Fried, the former FTX CEO, was recently at the helm of one of the largest crypto collapses in recent memory. It is alleged that the MIT graduate was unaware of the inner workings of the relationship between FTX and Alameda Research, a sister company helmed by his close associate Caroline Ellison.

Since his arrest by Bahamian authorities on Dec. 12, Bankman-Friend’s future is unclear. Many people would like to see him and close associates like Sam Trabucco, Gary Wang, Constance Wang and Nishad Singh punished for their alleged crimes. Bankman-Fried was extradited to the United States on Dec. 22 and released on a $250 million bail bond. Many pundits have continued to speculate on his future and whether SBF will now be spending the rest of his days in jail, quite possibly with many of his close associates.

Another person on the list is Do Kwon, co-founder of Terra, a blockchain platform designed to make payments more efficient. Upon its launch, Terra’s algorithmic stablecoin, TerraUSD (UST), attracted 40 million users, with the project raising $32 million from investors, including Arrington XRP Capital and Polychain Capital. It also won support from mainstream companies like Korean ticketing firm Ticket Monster and travel operator Yanolja.

Following Terra’s collapse, a whopping $45 billion of capital was wiped from the crypto market within seven days. It is estimated that the crash affected more than 200,000 South Korean investors, leading several groups to file a class-action lawsuit against Kwon. The South Korean government recently revealed that it is pursuing criminal charges against Kwon, with similar lawsuits filed against him in the United States and Singapore.

In September, the Seoul Southern District Prosecutors’ Office announced that it had started proceedings to revoke Kwon’s passport while placing his name on Interpol’s red notice list. Despite the gravity of the situation, the Terra co-founder seems to be making little to no effort to hide from authorities.

Three Arrows Capital (3AC) was founded in 2012 by Su Zhu and Kyle Davies. Before its collapse, it reportedly had $18 billion in assets. In March, blockchain analytics firm Nansen suggested that 3AC managed about $10 billion in crypto alone. However, speculation about uncollateralized borrowing emerged as early as Q1 2022.

Related: 5 cryptocurrencies to keep an eye on in 2023

Before their fall from grace, Davies and Zhu had become well-known names in the crypto space, with Zhu amassing more than 500,000 Twitter followers. 3AC had stakes in several popular projects, including Aave, Avalanche, Luna, Deribit and Ethereum. As of July 2022, the crypto hedge fund’s bankruptcy filings show the firm owes $3.5 billion in creditors’ claims.

Lastly, it should be noted that throughout 2021 and 2022, Zhu and Davies lost more than $3 billion, putting 3AC’s collapse on the list of the most significant hedge-fund trading losses of all time.

Alex Mashinsky is the founder and former CEO of Celsius Network, which was one of the largest crypto lending platforms in the world. In June, Celsius abruptly froze customer withdrawals, swaps and transfers, citing client safety and extreme volatility. Shortly after, the company filed for Chapter 11 bankruptcy, revealing a $1.2 billion hole in its accounts.

At the time of its downfall, Celsius had $4.3 billion in assets, with losses estimated at $5.5 billion. Just one month before Celsius filed for bankruptcy, Mashinsky withdrew more than $10 million in cryptocurrency. Several other company executives — including former strategy chief Daniel Leon and technology chief Nuke Goldstein — were also found to have taken similar actions.

.@CelsiusNetwork is pausing all withdrawals, Swap, and transfers between accounts. Acting in the interest of our community is our top priority. Our operations continue and we will continue to share information with the community. More here: https://t.co/CvjORUICs2

Before freezing customer funds, Maskinsky’s Celsius was one of the most prominent players in the crypto market, holding over $8 billion in client loans and almost $12 billion in assets under management. The firm had more than 1.7 million customers, with each being offered returns of up to 17% on their crypto deposits.

Stephen Ehrlich is the founder and CEO of cryptocurrency brokerage Voyager Digital. Days after the Celsius bankruptcy, Voyager announced that it would be halting all customer withdrawals and trading. It filed for Chapter 11 bankruptcy four days later. It soon became apparent that one of the reasons for Voyager’s collapse was a staggering $670 million loan to 3AC.

To make matters worse, all of the company’s loans were included in an investor call just a few weeks before the company’s collapse, with documents showing that the loans had been collateralized in tiny portions. Other red flags worth highlighting include an accusation by the United States Federal Deposit Insurance Corporation that Voyager illegally claimed the agency insured it. At its peak, Voyager had a whopping $5.8 billion in deposits in its coffers. More recently Binance outlined its intention to buy out the troubled company.

The past year has been rocky for the industry. As the new year approaches, can the market bounce back even stronger and forge a better future for all its participants? Time will tell.